BY BILL FORMAN / Colorado Springs Independent
Sometimes you have to create your own mythology, and Cowboy Dave Band frontman Dave Wilson knows how to do it with droll panache. 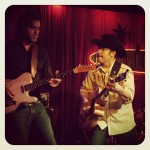 Grab a copy of Saddle Up, Pal, the band’s 2009 debut EP, and give a listen to the “Cowboy Dave Theme Song.” Graced by the baritone twang of an electric guitar that echoes Johnny Cash’s “Ghost Riders in the Sky” and Steve Earle’s “Guitar Town,” the song celebrates the heroic deeds of its title character and includes a mid-song skit in which all parts are voiced by Legendary Shack Shakers frontman J.D. Wilkes (including the classic Dudley Do-Right dialogue, “You must pay the rent … I can’t pay the rent … You MUST pay the rent …”).

BY ADAM LEECH / Colorado Springs Independent
I’d like to welcome a new group to the SoCO musical family, the Cowboy Dave Band. Recently relocated to the Springs, Cowboy Dave Wilson will make his inaugural local appearance this Friday, Aug. 13 at the Crystola Roadhouse. The group belts out a clean and crisp brand of upbeat and danceable, rockabilly-soaked western swing.

Already known along the Texas-Nebraska corridor (and parts of Nashville!) as the frontman for FortyTwenty, Wilson has cut an impressive six-song EP (featuring Col. J.D. Wilkes, of the Legendary Shack Shakers, playing the villain in the “Cowboy Dave Theme Song”) with his freshly minted band. There will be plenty more in the future on these guys, for certain — Wilson’s opened for living legends such as David Allan Coe and Junior Brown — but until then, give ’em a listen at cowboydaveband.com. 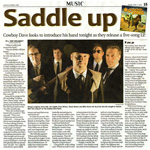 BY L. KENT WOLGAMOTT / Lincoln Journal Star
The man, the myth, the cartoon hero, Cowboy Dave is back, looking to turn any bar into a honky tonk and, of course, save the day. Cowboy Dave is Dave Wilson, the frontman of FortyTwenty. He’s introducing his new group, appropriately called The Cowboy Dave Band.

Cowboy Dave is Dave Wilson, the frontman of FortyTwenty. He’s introducing his new group, appropriately called The Cowboy Dave Band tonight at the Zoo Bar. The 9 p.m. show will showcase the new band and serve as a release party for “Saddle Up, Pal,” a six-song EP.